From my idea of the Airedale Terrier World War One Memorial at Easthaven to the official launch on 22nd June 2019, it has been a 'long haul'. During the three years when I sometimes doubted that my idea would ever come to fruition, I lost my two much loved Airedale Terriers, Teddy and Murphy. I placed their ashes below the Airedale monument.  Good friends in the club bolstered me with their support and never doubted for one moment that the monument would happen (at least that's what they told me).  I would like to thank Hazel and Jim Collins who worked very hard to help to attain the wonderful outcome.  Thank you also to Ken Goswell who worked constantly alongside me throughout the project and worked very, very long hours in the run up to the opening - building the magnificent piers at the entrance to the monument and laying slabs around the monument. Some of which he made by hand with the haunting pawprints of the 'invisible Airedale' walking towards the monument. Also a very big thank you to Wendy Murray and the whole community of Easthaven for allowing us to place the monument at Easthaven and giving us their full support.

To everyone who generously contributed and gave their support, you have my gratitude.

I hope you all enjoy the photographs taken on the day which you will find in the Photo Galleries under the heading 'War Memorial".

It was a wonderful sunny day and the ceremony was very moving. But as you will see from the photographs, there was lots of joy and laughter along with the tears we shed for the sacrifices made by our beloved breed in that terrible war.

If you would like to visit the monument, Easthaven is a beautiful, peaceful village on the east coast of Scotland near Arbroath.  The postcode is DD7 6LS 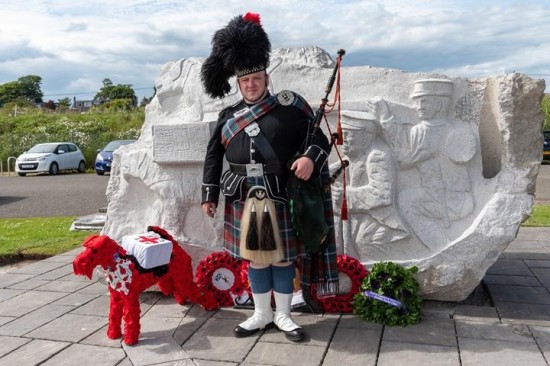 Piper Daniel Sweeney  in front of the monument with the magnificent

poppydale made by Jim and Hazel Collins